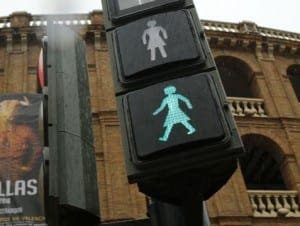 PERHAPS it is because of International Women’s Day or perhaps it’s just for a change.

Because Valencia has brought out new traffic lights swapping the green man for a woman.

The town’s equal rights commissioner presented the idea on the eve of International Women’s Day and the new lights are now located at 20 locations around the town.

Valencia is now run by progressive party Compromis, who are ‘trying to make women more visible’.

It costs no extra to taxpayers as it is simply an upgrade to old traffic lights which had already been funded by the council.

The 20 locations were chosen because of their high pedestrian density.

Two Valencia residents questioned by El Pais declared themselves ‘indifferent’ to the new lights, claiming it ‘would have been better to have installed traffic lights with sounds for the visually impaired’.