A DOUBLE-amputee had a sour end to his Spanish holiday when he was allegedly told he would have to crawl on to the plane. 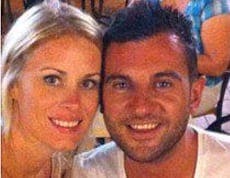 Matthew Parkes from Manchester says he was ‘made to feel like a second-class citizen’ after Ryanair gate staff at Malaga airport allegedly told him ‘to drag himself down two ramps, a set of stairs, across tarmac and up the steps of the plane’.

The father-of-three, 38, refused but was then carried the full length of the plane on a stretcher chair in front of all the other passengers.

Parkes, who had both legs and part of a hand amputated last year after falling ill with sepsis on holiday in Mallorca, is lodging a formal complaint.

“Ryanair made me feel humiliated and like I didn’t matter,” he said.

The budget airline company says Parkes was provided with the ‘correct assistance’ and that ‘there is no truth to the claims’.