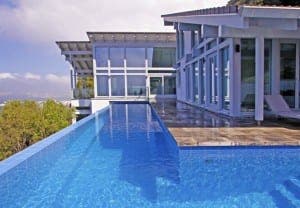 THE Rock’s buoyant economy and limited housing stock have been the driving force behind Gibraltar’s property market.

According to the Spotlight: Gibraltar Residential Market, commissioned by Savills, the prime apartment prices in Gibraltar rose by 15% between 2013 and 2015.

It could not be more different to the trials and tribulations that have burdened the property market north of the airport runway since 2007.

“It turns out that the Gibraltar residential market is good value for money and 12 times cheaper than Monaco,” explains Sammy Cruz-Armstrong, Director of Savills Gibraltar.

“Gibraltar has its own unique characteristics, history, culture, and has developed on its own path,” the report states.

“A modern, compliant, British jurisdiction, Gibraltar offers community and safety that makes it an appealing place in which to live.”

The Rock’s location on the shores of the Mediterranean makes it attractive for both business and leisure by giving it the characteristics of both a city and a resort.

“When the crisis struck, there were a lot of developments under construction, and building continued until 2010,” says Cruz-Armstrong.

The reports explains that entirely new market tiers have opened up, attracting the globally wealthy.

The hybrid nature of Gibraltar as a conurbation, destination and recreation location diversifies risk while maximising the market for property.

Cruz-Armstrong is also quick to praise the ‘sharp, precise research document’ that will assist in putting Gibraltar on the map and is distributed throughout 700 global offices of Savills.

“It is a great instrument for selling Gibraltar and compares us very favourably to other similar type jurisdictions,” she says.

Gibraltar topped a list of 14 worldwide territories, rated cheapest in terms of house prices ahead of territories including the Bahamas and the Cayman Islands.

Cristina Hodgson - 28 Nov, 2022 @ 09:15
A middle-aged woman could have choked to death had it not been for the quick thinking of an off-duty policeman, who saved her life. The...