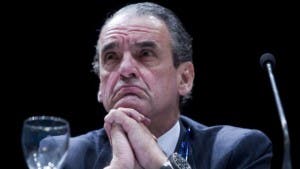 FORMER chairman of Banesto bank who was twice jailed for embezzlement has again been arrested on suspicion of money laundering.

Mario Conde was among eight people arrested on Monday, including his son, daughter and her husband.

Since 1999, funds from his Banesto days had reportedly been repatriated to Spain from Switzerland, Luxembourg and the UK in incremental amounts of no more than €3,000, using a network of companies that included an aloe vera producer.

Conde, AKA “The Shark”, could face another 12 years in jail after serving less than half of his previous 20-year conviction.

He will appear before a judge later this week.