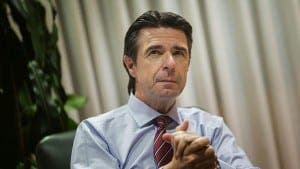 He also left his position as MP and chairman of the Popular Party in the Canary Islands.

The snowballing revelations were making it difficult for senior Popular Party leaders and MP’s to defend him in public, leading him to resign before Friday’s cabinet meeting.

It had been revealed on Monday that he was the director of a Bahamas-based company called UK Lines Limited for a two months 1992.

The company was wound up just before he was first elected into office 21 years ago.

Mr Soria, however, spent most of the week denying he had ever had a company registered in Panama, and even called a press conference to hammer the point home, saying his family business only had a commercial relationship with the company.

However it soon transpired that he had been secretary of the company for six years, until 1997, during his stint as Mayor of Las Palmas.

The lies continued to pile up as it was revealed yesterda that Mr Soria was a director of another offshore company, the Jersey-based Mechanical Trading Limited, until it was dissolved in 2002.

Again this was during his stint as mayor.

Late last night, the Prime Minister’s office announced that the Industry Minister would not be attending today’s cabinet meeting, failing to offer an explanation.

Mr Soria then resigned the next morning.

He is the latest head to roll following the release of 11.5m documents from the Panama based law firm Mossack Fonseca, which revealed how the rich and powerful hide their wealth.