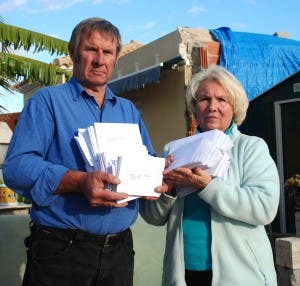 A TOWN hall in Almeria has appealed the compensation offer it was ordered to pay British couple the Priors after their 100% legal home was demolished.

It seemed positive when the news broke on Monday that Len and Helen Prior, both 72, who have been forced to live in a converted garage for eight years, were set to claim around €425,000 in compensation.

But a source revealed last night that Vera town hall has appealed the decision which means  ‘it will be another year before things are any nearer to settlement’.

The couple had slammed the Spanish political system as they were set to be awarded half of the €800,000 they were hoping to get after their home was wrongly knocked down in 2008.

In an emotional outburst Helen Prior insisted: “It’s complete madness – we feel like we have been dumped on from all angles and the house was 100% legal.

“To add insult to injury we cannot sell the plot for anything other than animals so it is worthless.”

The couple, who made headlines around the world, were due to receive the minimal amount despite their bulldozed home in Almeria having the correct paperwork signed off by the town hall.

The Berkshire couple insisted the figure would leave them with ‘only pennies’ after they had paid legal bills.

“Spanish politicians are the dregs of the earth and we can’t afford to go back to the UK anyway,” Helen continued.

She added: “We just kept pouring money into the house and on the day it was demolished it was worth €690,000.”

Campaign group AUAN expected an appeal, describing the offer as a ‘hollow victory’, insisting that the couple must be given some ‘moral damages’.

“Enough is enough. It is not acceptable that they must continue to live in their garage suffering continuous moral damage after the house of their dreams was demolished before their eyes,” said president Maura Hillen.

“The Priors did nothing wrong except to trust the Spanish state and its legal system.”

Casas Ambiente: the professionals to use if you really want to sell your property in Moraira on Spain’s Costa Blanca