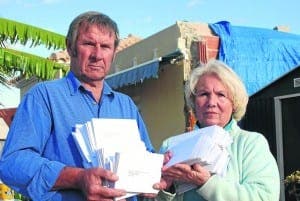 WITH the Priors (right) set to be badly short-changed after their horrific eight-year saga and a case just as insulting to an expat couple in Alhaurin on our front page, it is a bleak week for foreign buyers.

While the British consulate estimates at least 4,000 Britons are owners of illegal homes, the true figure is probably much higher.

How heartbreaking that ordinary, hard-working people who were only going to benefit the Spanish system are now set to be screwed over by it.

A much needed glimmer of hope came with two new protective laws last year, but for far too many the damage is already done.

Let’s hope the authorities, agents and, above all, new buyers have taken heed of what went before.