FOOTAGE of a stressed orca slamming her head into a gate has been released.

Ric O’Barry’s Dolphin Project released the footage of the SeaWorld-owned orca at Loro Parque in Tenerife.

The park – which has close links with SeaWorld – came under heavy criticism in a tell-all documentary on SeaWorld called Black Fish.

There are currently six orcas at Loro Parque. 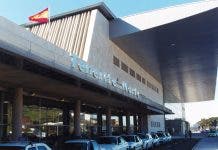