No country for iPhones

I KNEW it as soon as I put my iPhone into hibernation mode and tore off a hunk of bread with my bare hands. I had arrived in the campo. 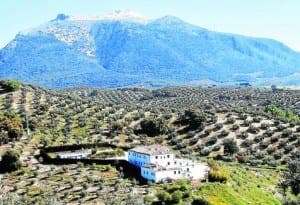 From sleeping in a bedroom overlooking the groves which provide this delicious golden dip to sipping a local red wine beside a roaring log fire, it’s a pampered introduction to rural life.

Of course, a tour of the landmarks along Cordoba’s Olive Oil and Wine Routes is never going to be hardship, although my mountain-biking colleague Rob Horgan experienced some of that on our weekend at Cortijo la Presa.

I had a more gentle time of it, exploring the hinterland on foot with Divina the goat (think celestial, not McCall) and getting stuck into some good, old-fashioned sightseeing.

“Say cheese, Divina”, I called. “Baa humbug”, she bleated back.

The country pile straddles the frontiers of three Andalucian provinces – Cordoba, Granada and Malaga – and is within easy daytrip distance of major tourist hotspots like the Mezquita and the Alhambra Palace.

Priego de Cordoba and Iznajar are just two of stunning Subbetica’s well-kept secrets that our hosts unveiled during our country activities weekend.

A dawn walk got the visit off to a refreshing start as we snacked on home-grown almonds and watched the sunrise cut through mountain mist as neighbour Francisco, stoked a bonfire.

The charming town of Priego is perched dramatically on a high cliff on one side, a jumble of whitewashed buildings, sensational Baroque architecture and handsome churches practically on top of one another.

Tossed between the Moors and the Christians over the centuries until 1341, the booming silk trade in the 18th century brought economic prosperity and accounts for many of the ornate buildings.

Isolated it may be but the local cuisine is bang on trend. At tapas bar Zyrah we feasted on honeyed aubergines, seared duck, tuna teriyaki, seafood risotto and gorgonzola croquetas.

Fine food and fresh air is the best sleeping pill and I was up with the lark next day to enjoy a typical cortijo Sunday in the great outdoors.

Housekeeper and champion forager Antonio led me off the beaten track to pick armfuls of wild asparagus and impart a vital lesson on edible and killer mushrooms while keeping our four-legged escort – a goat-dog menagerie – in check.

Later, we time-travelled back to the days of the conquistadores on a guided tour of the magnificent hilltop town of Iznajar (Moorish for ‘happy castle’ although I doubt it was that).

Climbing the steps to the highest tower atop the 8th century fortress, you can almost smell the blood and sweat from battles fought long ago and hear the clash of steel blades as you browse the alarming samurai sword collection.

The castle is cobbled together in a charming Christian/Moorish collaboration, added to as each side conquered, surrendered and reconquered.

The blast from the past intensified as I clambered down a rickety ladder into an ancient reservoir, preserved from Arab times when a sloped terrace above funnelled rainwater down into the cool, arched chamber you can visit today.

Indeed, water is a running theme in Iznajar which overlooks a stunning turquoise reservoir – an incredible inland paradise that’s the country equivalent of Nikki Beach with sunbathing areas, kayaks, pedalo hire and several bars and restaurants serving up panoramic views with your pre-prandial cocktail.

It’s the campo but cut off from civilisation it’s not, with outdoor pursuits aplenty and culture in no short supply.

If you can’t put your iPhone down for one weekend, you are missing a treat.

Ride of my life

I HIT two steep learning curves during my cycling weekend in the rocky mountain ranges of the Subbetica.

One: there’s a reason mountain bikers wear those body-revealing lycra cycling shorts. Two: hippos are right. Mud can be glorious.

I was covered in it most of the time, returning from the experience with a satisfying burn in my thighs … but a less-welcome throbbing in the buttocks from friction burns.
It was (saddle)bags of fun but next time I’ll be sure to get my clothing in gear too.

From exploring a secret cave occupied by rebels during the civil war to whizzing through muddy puddles in the olive groves, mountain biking in the hills above Cordoba is something I won’t forget in a hurry.

Rewind two days and I arrived at Cortijo La Presa with fellow reporter Iona Napier and our plus ones for a mountain biking, hiking and yoga extravaganza.

Greeted by an excitable Chicuca (the cortijo’s water dog), charming hosts Jonathan and Claire quickly followed to welcome us into their grand retreat on the outskirts of Las Lagunillas.

A trained mountain bike leader, Jonathan left his job as a sub editor at The Sun newspaper to make headlines with his own business. The yoga side is taken care of by Financial Times journalist Claire, who was trained by nuns at school and monks in Thailand. She has been teaching for six years and is also trained in gong baths and meditation.

Hearty homemade country fare, and lots of it, is a strong theme of every weekend. Served up by housekeepers Carmen and husband Antonio, we gorged on prawns with quinoa and avocado, salmon with roasted veg, goat’s cheese, chorizo, white pudding and barbecued chicken.

The best thing about cycling is that greed is good. Every calorie is essential fuel so you are encouraged to eat your fill.
As a ‘city boy’ and regular on-road cyclist the prospect of going off-tarmac sounded daunting but Jonathan’s local know-how quickly dispels nerves.

He has designed two of the trails (more are to follow), using natural materials, and on day one we hit the first, christened Almond Avenue.
A gentle spin snaking through olive groves and along a cart track beside a stream, tranquillo doesn’t even cut it.

Diverting off track to visit one of the route’s star attractions, we scrambled up a steep hill to a cave that was once home to humans during the Spanish Civil War. More recently, rabbits have claimed squatters’ rights.
Looking out over the breathtaking landscape to the sounds of warbling birds and flowing water, I saw why Jonathan loves this place.

He and Claire were living in Iznajar and already smitten when Isidoro and Carmen asked them to come on board as business partners last year.

“How could we say no?” says Jonathan. “We are the perfect team. Isidoro is a builder and does a fantastic job with any work that needs doing, Carmen knows about the market and renting property. Claire and I bring the activities to the table, with the biking, yoga and media contacts.”

After lunch we were ready for Olive Groove, Jonathan’s second bespoke trail, a downhill run with all the prescribed bumps and bends to get the heart racing.
From there, the ‘easy riding was over as a challenging climb above the cortijo worked our thigh muscles into a slow burn. Then the reward – a twisting downhill slalom with ups, downs and spectacular views.

A tough first day was perfectly rounded off with a relaxing yoga session, hosted by Claire, where I discovered for the first time the real pleasure of yoga, especially after a gruelling bike trip! Upcoming yoga retreats at the Cortijo are scheduled for June and October.
Day two was slightly tougher with a challenging climb part of the way up Mount La Tinosa, Cordoba’s highest peak.

Dubbed ‘base camp’ by Jonathan, the views rival any in Andalucia and the uphill trip is more than repaid by the ride down.
A morning shower had left the track awash, calling for yet another clean-up.

But as Jonathan maintains,‘With mountain biking, the muddier you get, the more fun you’ve had’.
And as it happens, you can believe an ex-Sun newspaper sub.

As I watch another spectacular sunset over the mountains, an ice pack pressed to my bottom, I’ll also take his word on another thing. Next time, I’ll wear cycling shorts.