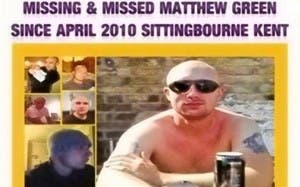 A BRITISH man who has been missing for six years has been found alive and well in Spain.

Matthew Green, 32, went missing from his home in Sittingbourne, Kent, in 2010, after going to meet his friends in London.

But despite being found, his parents Jim Green, 64 and Pauline, 63, cannot contact him due to data protection laws.

Spanish authorities spoke to Matthew after becoming concerned for his welfare.

He reportedly gave them a number of names, one of them his real one, which they discovered was on a missing person´s database.

But his parents cannot be put in contact with him or told where he is because of data protection laws. 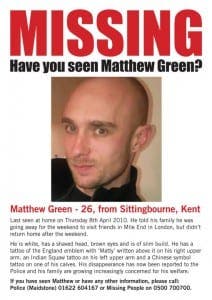 The family are hoping to enlist a private investigator, and have contacted criminologist detective Mark Williams-Thomas.

Dad Jim said there are questions they need answers to.

He said: “I know he’s a grown man, but put yourselves in our place.

“After all this time it would be such a relief (to see him) for all of us, all the family and friends that we know have been concerned.

“Bless his little cotton socks, I’d give him a hug and a cuddle.”

The questions that follow would be, he said: “why? How have you survived for the last six years? Where have you been? We do not want to scare him off.

“They’re questions we have asked time and time again.”

A DNA match to the father and fingerprints taken by Interpol have led authorities to say they are 99.9% sure it is their son.

Mum Pauline has written to Matthew via the embassy but again, because of data protection laws, she will never be told whether or not he received it.

She said: “We know he’s in Spain, but no not know where because they won’t tell us. We don’t know what happens next.”