THE man arrested recently in the UK along with 17  migrants has been linked with the missing Lisa Brown case.

A 55-year-old Brit was seized in Chichester marina on Tuesday when his catamaran was searched after crossing from Europe to Britain.

There were 17 Albanians inside without papers who are now facing deportation while the man is detained in connection with facilitating illegal immigration.

According to The Times, the man is wanted in connection with the disappearance of Lisa Brown, an expat who was living in Guadiaro, who vanished in November.

Reports claim that Spanish police had issued an arrest warrant for the Brit, who has not yet been named, in connection with a murder inquiry.

The catamaran was reportedly flagged down after marina police ‘became suspicious’ as it passed the Isle of Wight and alerted Sussex police to check the boat upon arrival.

A yacht search in Lanzarote yesterday has also been connected to investigations.

It is understood that police fear Lisa’s body may have been left at sea and are searching for proof of this.

Meanwhile Lisa’s boyfriend Simon Corner was arrested in Denmark a fortnight ago before being extradited to Spain where he was initially detained. 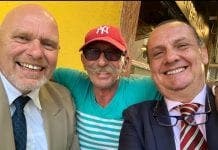