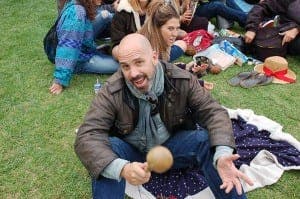 DESPITE my love of live music, I’m not really much of a festival person.

The thought of spending four days in a field paying €5 for a toilet roll has never really appealed to me.

But the Twist of Lemon event in Cartama sounded good. It promised two days of music and healthy living in the sun, just a short drive away from the fleshpots of Marbella.

A chance to tune in, chill out and unfrazzle my frequently frazzled brain, especially after deadline day, all in the bright Andalusian sunshine.

The only drawback that I could see was the fact that we would be camping.

I have never been a big fan of sleeping under canvas. You can probably trace that back to my days in the cadets at school, where I would frequently get soaked in a tent on a windswept training exercise on Dartmoor. That kind of experience scars a man.

The girlfriend, who was already in a high state of excitement about the yoga and meditation classes, had it all planned out, however.

“I’ve phoned the organisers at Finca El Limon and had a word” she announced, “I’ve let them know that we are coming as press and they have put us in an en suite room in the finca itself.

“They weren’t going to but I told them that you were much older than the other festival goers” she grinned.

I was tempted to ask if they had laid on a stairlift for me as well but thought better of it.

And then, in the words of the song, ‘If it wasn’t for bad luck, I wouldn’t have no luck at all’, on the weekend of the festival the heavens opened. Great news for farmers, less so for festival goers.

With forecasts of a downpour on the Sunday, the organisers wisely decided to cram all the events into one day and so the revellers really went for it.

Satanito headed off with whoops of joy to join in with the other kids in a muddy game of football, while the Happy Hippy was in her element as she arranged her chakras (or something) in the yoga class and looked for new trinkets and beads to buy in the market stalls.

I initially had nothing planned past staying in our warm and dry ensuite room but was eventually coaxed down to join in the fun.

And so it came to pass that I found myself not only shaking an out-of-sync maraca in a drum circle but also leaping around in wellies with the Happy Hippy in wellies to Spanish reggae in a muddy field and actually enjoying myself immensely!

If you can’t beat them, join them, I may have shouted.

And as the last band came off, the heavens opened and we all got soaked and stuck in the mud a Spanish voice yelled out “Fantastic! Now it feels like a real English festival!”