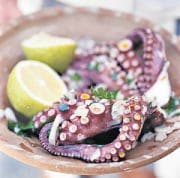 OCTOPUS fishing will be banned in Axarquia from this September.

Fishermen have been left furious, claiming the eight-legged sea creatures account for 60% of their income.

They maintain they return all octopuses weighing under a kilo into the sea, which has led to a ´regeneration of the fishing grounds.´