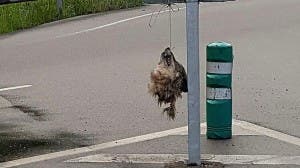 A WOLF’S head left hanging from a road sign in Spain has infuriated conservationists.

The head was found on Monday in Asturias, and is thought to be a sign of growing discontent for conservation management among local farmers and poachers.

The surge of the wolf population on the Iberian Peninsula – now believed to be at 2,500 – has come with increased attacks on livestock.

Forest rangers group AVISPA said there has been a recent string of wolf decapitations, and that they are most likely revenge for the government’s wolf management plans.

They have called on the Office of Environment in Asturias to launch a full investigation, labelling the beheadings as ‘environmental terrorism’.

Spanish police are appealing for information on the recent deaths, which saw two wolves’ heads hacked from their bodies.

Three more wolves were found dead in the same area over the past month.

Activists marched in their thousands earlier this year to demand greater protection for the Iberian wolf, which can still be hunted by anyone who has a special license.