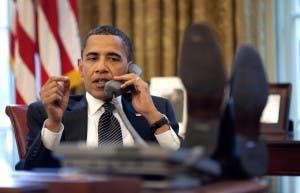 BARACK Obama will make his first presidential visit to Spain next month.

He will meet with leaders to discuss the economy and security from July 9-11.

The White House revealed he will also meet with the acting prime minister and have a sit down with King Felipe.

The visit comes at a time of political uncertainty in Spain.

The Spanish government is to hold fresh elections on June 26 after a hung parliament in December.

The US President will first travel to Poland to attend the NATO summit in Warsaw and discuss security issues with Polish President Andrzej Duda.