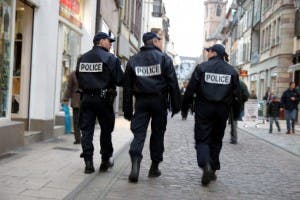 CHEMICAL weapons, drones carrying explosives and remotely detonated bombs are just a few of the terrorist attacks French authorities are preparing for at the Euro 2016.

Millions of fans from Spain, the UK and across Europe are expected to descend on Paris for the month-long football tournament.

The games begin on Friday and plots targetting the event have already been uncovered.

Earlier this week Ukranian authorities arrested a Frenchman who, with an accomplice, was planning attacks before and during the event.

The UK Foreign Office today warned fans attending to be ‘vigilant at all times’ as busy areas could ‘potential targets for terrorist attacks’.

Stadiums, fan zones and venues broadcasting the matches were all listed as potential high-risk targets.

“Certainly we have seen propaganda, Isis and potential talk of plots against the Euros, but we’re working with all those various different agencies and police to make the Euros a safe event and a safe games.

“We’re a key part of the planning. Although the ultimate policing of the event and the planning is for the French, we are all involved in properly trying to understand the threat.”

France has been plagued by terrorist attacks in recent years.

Last November saw three suicide bombers detonate their explosive vests outside two of the entrances to France’s national stadium and at a fast-food outlet nearby when they could not get inside.