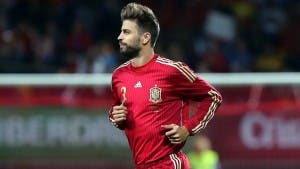 SPAIN stole three points in their Euro 2016 opener thanks to a last-gasp Gerard Pique header.

In the 87th minute, Spain finally scored the winner off the head of the controversial Barcelona defender.

The ball rarely crossed into the Spanish half, as La Furia Roja took 18 shots to the Czech Republic’s six.

Still, the Czech defence looked in control and steadfast in the hands of their internationally renowned goalkeeper, Petr Cech.

The brilliant Arsenal stopper could only make so many saves, though, before the attack broke through.

The decisive goal came courtesy of a header from Pique off of an Andreas Iniesta cross.

Pique had been booed by large sections of Spanish fans in games leading up to the tournament. It followed comments regarding Barcelona and his loyalty to Catalunya.

The Spanish face Turkey next on June 17.