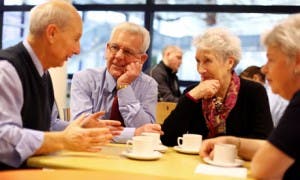 Young people in Britain were shocked by the results of the Brexit vote last week.

A large margin of youths supported remaining in the European Union while many of their parents and grandparents did not.

However science may help to explain this generational gap.

Scientists have found that older people tend to be more conservative than their youthful counterparts.

The time period that a person is born into plays a part in forming their worldviews but aging is important as well.

A 2011 study found that the older people surveyed had decreased levels of openness to new experiences.

Because openness tends to predict liberal attitudes, this finding is important in studying the effect of aging on political views.

One explanation might be that people tend to minimize uncertainty and ambiguity as they age.

But while older people may tend to be more conservative does not mean that they can’t adopt more liberal views. In fact, older generations and the world in general have become more tolerant.

It simply takes more mental effort as we age.