A COMMON reply when I told people I’d be going to Europe for the summer was, ‘Make sure you go to Lisbon.’ 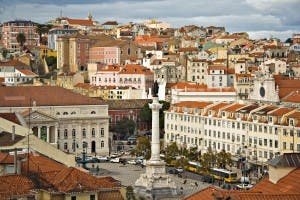 The continent’s westernmost capital has developed a reputation as a culturally rich city with magnificent sights and a fun nightlife, without the hefty prices or overwhelming tourism of Barcelona or Madrid.

Though the flights from Malaga aren’t at the most convenient times, Lisbon turned out to be an enjoyable escape from the Costa del Sol over a bank holiday weekend.

I was lucky enough to stay with a local who took me to some great spots and skipped the overrated ones.

The right weekend in Lisbon is at once entertaining and relaxing, enriching and invigorating and my five-centre hitlist covers the complete package. 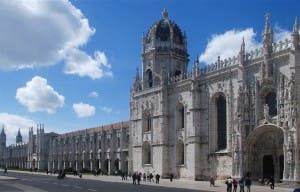 HEAD beyond the city centre, west of the magnificent 25 de Abril Bridge (a Golden Gate lookalike named after the date of Portugal’s independence from Salazar’s regime) to find Belem, a focal point of Lisbon’s history.

Here, in a single square, you’ll find the Tower of Belem, the Jeronimos Monastery, and some of the best pastries in the city.

From the Tower of Belem, you see Lisbon from a different vantage point to anywhere else in the city, a view that underlines its relationship with the Atlantic and the Tagus River.

The Jeronimos Monastery is like any great European Catholic church: dark, immense and echoic. Two famous late Lisboeta rest in peace here: Camoes the poet, and de Gama the explorer.

After sightseeing, walk east of the monastery to a bakery with blue awnings named Pasteis de Belem to try Lisbon’s famous pastel de nata. Make sure it’s dusted with cinnamon and powdered sugar. 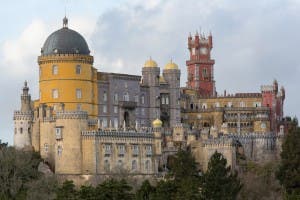 A FAIRYTALE city fit for a Disney princess, Sintra is a day trip not to be missed. It’s 40 minutes (by train) to this mystical city awarded UNESCO World Heritage Status.

With a skyline to rival Manhattan, a host of 19th-century turrets and domes stand majestically above the colourful town houses.

Cupped between two impressive mountains, both can be climbed and are within two hours of the city centre.

The effort is worth it for the rewards at the top: the mediaeval Castelo dos Mouros perches on the crest of one summit and the Pena National Palace on the other, which was the summer residence of Portugal’s monarchs during the 18th and 19th centuries. 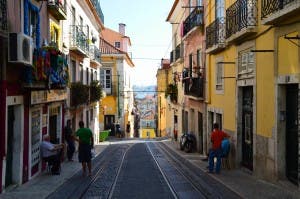 BEFORE clubbing until six in the morning, most nights in Lisbon starts on the crowded, cobbled streets of Bairro Alto.

Thousands of people stand outside the hundreds of bars packed into just a few square blocks to quaff €1 pints of beer and €6 pints of mojitos (yes, pints of mojitos). Most bars also offer 75cl versions – worthwhile for the mojito, but it can end up being more expensive for the beers.

Despite the foot traffic, taxis and even municipal service vehicles try to make their way through at night. Some revellers sit on the boots to cadge a free ride as they drive past. 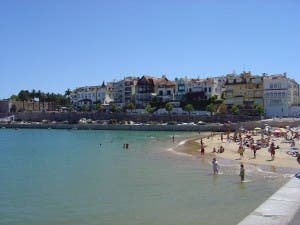 WEST of Lisbon lies Cascais, an affluent beach town that looks out onto the Atlantic.

If you can rent a car, the drive makes the trip worthwhile. Head out from Lisbon along the Tagus River, travelling west on the scenic N6. The 30 km routes hugs the coast, as the river becomes the ocean, past small beaches hiding in rocky inlets (think Playa del Cristo) where the tide rises and falls against the natural sea walls. 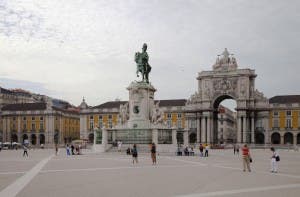 DOWNTOWN Lisbon was almost entirely destroyed during the city’s catastrophic earthquake and tsunami of 1755, and subsequent fire.

In the devastation’s aftermath, the Marquis of Pombal took complete control of reconstruction.

Downtown Lisbon hosts the city’s shopping district and is the most bustling daytime sector. The roads towards the river culminate in the Praca de Comercio, where the city puts on concerts, festivals and cultural celebrations throughout the year.