It promises to be an unforgettable spectacle with the world’s finest athletes competing at this pinnacle of sporting excellence with its Olympic values of fair play, gentlemanly conduct and respect for the opposition…. That is, unless Mongolia are delving back into their past and modelling their Olympic squad on Gengis Khan.

It was whilst pondering the Mongolians (as you do), and other smaller nations represented at the Olympics this year, that the thought occurred to me: if Marbella finally declared independence from the rest of Spain – and after years of  town hall ‘management’ by Gil, Muñoz and Roca, Madrid has rightly regarded Marbella as a Banana Republic for over a decade now – what events could the brave new nation expect to win Olympic medals in? And what new events would the organisers have to sanction so that Marbella had a sporting chance? 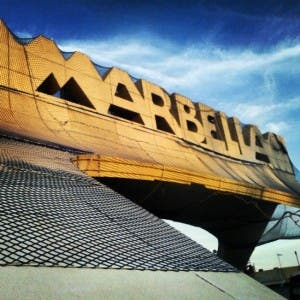 Located as it is on the sparkling shores of the Mediterranean, you would think Marbella would be in with a fair chance of a gong in one of the sailing events. Unfortunately though, most of the action on the waters off Marbella takes one of two forms.

However, the introduction of the five kilometre superyacht/floating gin palace cruise could see Marbella on the winners’ podium, especially if the crews had to moor outside Nikki Beach and pick up a dingy full of bimbos in the shortest possible time.

They would also excel in a 14 km moonlight contraband dash across the Straits in a stripped-down powerboat. Their biggest opposition in this event would be expected to come from Morocco, Gibraltar and, of course, the Guardia Civil.

Strangely enough, swimming doesn’t feature highly in the list of events that Marbella could expect to do well in. Although the town boasts an impressive range of beach clubs, very few people actually swim in the pools. This is possibly due to the on-air admission of one of the TOWIE girls that when she goes to a champagne spray party in Marbella, she prefers to pee in the pool rather than queue for the ladies. Charming.

Talking of champagne parties, Marbella could certainly pick up a medal for champagne spraying, and, judging by the amount of white powder and rolled up banknotes left behind in the cubicles, downhill ‘skiing’ too…

Then there is track and field. Marbella could expect to bring home a host of medals in the Blue Riband events of 100 and 200 metres. You only have to clock the speed that the Lookie Lookie men sprint out of Banus when the Policia Local are doing a spot check to realise there is a wealth of talent out there.

The same also goes for the girls working the second line. If you’ve ever watched the speed and teamwork that these ‘ladies of negotiable virtue’ employ in getting a leg-over when they spot a group of drunken golfers – all while wearing high heels – you’ll realise they are naturals for the 4×100 metres hurdles.

Other events would require small changes, such as the Pole Vault becoming the Pole Dance, and the Women’s Triathlon comprising of Sunbed, Fake Tan and V-Jazzle. Marbella could also do well in the shooting events although only in the ‘drive by’ and ‘automatic weapons’ categories.

With this wealth of medals gained, the only final point to consider is the anthem to be played. And although Bambolero, the Benny Hill theme and Spandau Ballet’s Gold were all considered, in the end I decided on any song from George Benson. After all, he’s played here enough times to be put in charge of composing the Marbella Anthem!