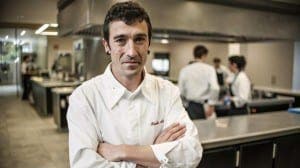 THE chef behind the world-renowned Azurmendi Bilbao is set to set up shop in a new restaurant in London.

Eneko Atka will open the doors to his self-named restaurant Eneko on August 1 at the prestigious One Aldwych hotel.

And for the month of August all meals will be half price.

And hotel general manager Kostar Sfaltos has like what he has seen from the Basque chef.

“Eneko has incredible vision and passion for Basque cuisine and shares the same high standards of quality, quest for innovation and respect for traditions as we do,” he said.