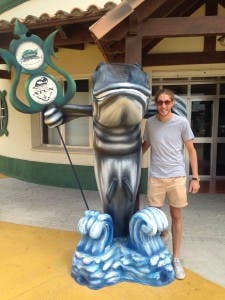 Rob Horgan indulges his fish fetish with a trip to the tuna towns of the Costa de la Luz where they do bluefin by the bucketload.

IT’S as hard to escape as the coast’s ever-present Atlantic breeze.

From Conil to Canos de Meca, Bolonia to Barbate and everywhere in between, tuna takes pride of place (and not plaice) on Costa de la Luz lunch menus.

But it is not just in restaurants that tuna is celebrated. Throughout Zahara and along the paseo in Barbate, giant sculptures of bluefin tuna are lofted on pedestals 10 foot off the ground. 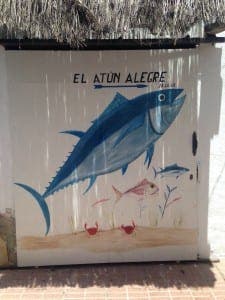 There’s another at Barbate’s tuna museum where you can purchase it every which way.

And during May and June, the four main tuna fishing towns of Conil, Barbate, Tarifa and Zahara proclaim their fishy love affair to the world with rutas de atun tapas festivals.

At this year’s Zahara event, held after the first full moon in May, 80,000 tuna tapas were consumed in a frenetic three-day fish fest.

The locals are extremely proud of their fishy obsession.

“If you grow up on the Costa de la Luz, you grow up eating tuna,” says Pedro Alcon, the 24-year-old son of a tuna fisherman from Bolonia.

“Tuna is our most important dish. The economy depends on it and the locals can’t get enough.”

He adds: “If you like tuna and don’t want to pay a fortune then there is nowhere better in the world.”

As part of the May cel 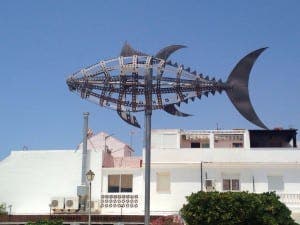 ebrations, fisherman from the four towns set up a complicated labyrinth of nets, called the almadraba, to catch atun rojo as bluefin are named in Spain, after the colour of their flesh.

As well as being a major social and gastronomic event, these festivals are economically essential for many of the smaller villages which rely on the work for their fishermen, factories and restaurants.  And their popularity has grown because of the eco factor.

The almadraba is a perfect example of sustainable fishing – only tuna are caught and only the biggest kept. There is no waste and no overfishing due to the strict quotas in place.

Invented by the Phoenicians some 3,000 years ago, the almadraba is positioned in a section of the sea close to the Straits of Gibraltar, where the tuna pass on their way to the warmer Mediterranean to spawn. 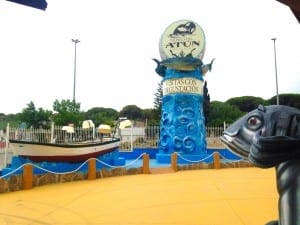 provide energy for the long journey south, the fish is at its most succulent when caught along the Costa de la Luz.

Once the nets are full, they are encircled by a ring of boats and lifted out of the water where the largest specimens, some weighing over 500 kilos, are selected by expert fishermen.

The almadrabas are put out again in September and October when the tuna return, a lot slimmer, producing a drier, less succulent meat destined for the canneries.

The ‘spring catch’ certainly lived up to all my expectations and, after fairly tonning into it over the weekend, this tuna addict can’t wait to go back for another fishy fix.

Catch of the day

Did Rob Horgan really eat a whole bluefin? This is his weekend tuna order:

By far my favourite way to eat tuna – lightly seared, chilled, thinly sliced and served with soy sauce, wasabi and ginger. Tataki is best shared, as a whole serving can be overbearing.

Slapped in as much lard as your grandmother’s roast potatoes, this is an acquired taste. Even when served with crackers, the lard can overpower the tuna and I won’t be ordering it again.

The epitome of international dining with local ingredients, this is a feast for the eyes as well as the tastebuds and these tuna jewels are best enjoyed at Vejer’s San Francisco food market, at Sushi Time.

For someone who likes his raw (how fresh tuna should be served on the Costa de la Luz) my experience was somewhat disappointing although if you like your tuna cooked brown in the middle it’s worth a try.

Doused in salt and accompanied with a slice of tomato and white onion, the thinly sliced Ijada de atun is satisfying without being spectacular.

Bizarre, brilliant and baffling. By far the most left-field take on tuna I encountered on my trip, these spicy mashed-up tuna and chilli parcels are kind of moreish but at the same time, I was unsure if I really liked them.

Cristina Hodgson - 6 Feb, 2023 @ 08:45
THE abandoned Montejaque reservoir, built in the 1920s, which never had any water due to a botched engineering job, will house an adventure park...