I’VE uprooted my life and shifted it to the Costa del Sol. 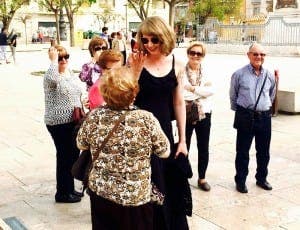 Endless miles of beach, Pina Colada’s, red wine and tapas. I’d affiliated Spain with postcard clichés. Had I considered the day-to-day? Had I considered that I wouldn’t be spending all of my time playing make believe in Spanish castles or lying on a lounger in some state of inebriation or another? I’m impulsive and 25, so erm, no, not really.

Actually living here and working is rather different. I mean, the heat, for one thing. As a Scottish snowflake I have to gather my melted self for resetting at least twice a day… And as a writer, who works from home, I don’t get out all that much. Despite the image we writers perpetuate as terribly troubled and solitary individuals; I’m actually very sociable! I really like people. I love their stories, their mannerisms, triggers and ticks. After all, this is where I find my characters; in a Frankensteinian combination of actual events.

A poem I wrote during week two begins ‘I live in terracotta pots, A lone Scot in streets too hot.’ Inspired by a Spanish couple across the apartment block, screaming at each other from their balcony; I watched, and I scribbled. Disconcertingly voyeuristic? Perhaps. But it was a vibrant moment of human interaction that I’d sorely missed. You don’t get that sort of uncensored interaction with acquaintances. I have this with the friends and family I’ve spent years laughing, shouting and crying with. The people I meet day to day, who serve me coffee or greet me from a checkout, are forced to exchange niceties under threat of dismissal. There’s something really sad about that. If a server is having a bad day, why should they have to bear their teeth at you, to force a smile? I digress.

I’ve read plenty of expat articles, chronicling their experiences of the ever elusive parking space, where to find the ‘best British pubs’ and how to navigate the Spanish NIE system. While often informational, none of them quite hit the mark for me. I was looking for something to validate my listlessness; someone to express feelings similar to my own. Instead I found a wealth of inspirational memes about new beginnings framed within lilac clouds and fresh spring blossom. It was all very optimistic clean slate sort of stuff. Perhaps, I wondered, due to a British “stiff-upper-lip” sort of mentality, or maybe I was just being a bit rubbish and needed to get over myself? While it is most likely the latter I still feel the need to write this.

Some two months ago my fiancé and I packed a deceptively robust Volvo with all of the “essentials.” And by essentials I mean half my library, three boxes of peanut butter popcorn bars, a full box of comics (some 50 volumes) and five jackets. Five jackets. Yes, five. Armed with my quintessentially vintage Scottish Barbour we drove off into the sunset. Sounds romantic right? Oh artistic licence. It was a rather dull and rainy evening in Paisley and we had a non-stop 12 hour drive to the Euro tunnel ahead of us. Engaged 1 day prior we talked of our future, excitedly planning the trip, while drinking endless service station coffee. As passenger I tried my best to stay awake, a source of conversation for the weary driver, but I fell asleep more than a few times.

On reaching France we stopped at a number of places, only for the night, enough to see a cheap hotel and to discuss the proficiency of each conveyor belt style toaster. By day 3 my fiancé had the egg timer down; immensely pleased with the dipping consistency he had perfected. I in turn had deciphered the toaster and together we reckoned ourselves experts of the continental breakfast.

Newly skilled and sleep deprived travellers then urged the trusty Volvo to drag itself up and through the Sierra Nevada. We had reached Spain and immediately rented a small holiday apartment in Torremolinos as we searched for more permanent lodgings. Looking for an apartment in April. Not our best move…

We were both working from home, in a holiday apartment, with Madonna, Cher and 1 Direction continuously blaring from the square below. While my fiancé has an established company, with colleagues and associates he can communicate with; I have a lot of books, my imagination and the occasional client to email. In Scotland, I could always take myself out for a walk, meet a friend for coffee, call my brother for a chat… In Torremolinos I didn’t quite know what to do, and while I could always phone my brother I struggled with hearing his voice and knowing I couldn’t jump on a 20 minute train to see him.

I began to wallow and struggled to write much except poetry. I also kicked myself daily for feeling this way in such vibrant new surroundings. One morning, sitting by the window, I genuinely proclaimed: “I feel like Scarlett Johansson in Lost in Translation.” I felt like everyone else had it sorted and I was sort of floundering about with my literature degree, in a strange place, discovering my complete lack of emotional self-sufficiency. Yeah, ok then Scarlett, away and do some karaoke with Bill and the locals…

And that’s what I did, sort of. Like starting a new school or entering a new job I went out and spoke to people. When relationships become established you forget the initial stages. The interactions that are often tentative and a little awkward as you figure out whether you like each other or not. Or finding someone you really like and deciding to force your friendship upon them. I remember borderline stalking a girl at University who had won me over during our tutorials. I’d try to pack my books away at the same speed so we’d be leaving together or I’d hang around outside class so I could ask her to go for coffee. She is now one of my bridesmaids!

I love lost in Translation but there’s no Bill Murray at the end. No one whispered something elusive into my ear that made me feel like it’s all going to be ok. I just started living outside of my own head.

As I write in the Spanish sun, fan humming in my ear, I ask myself, how does it feel to be an “expat?” It’s a little bewildering but, on the whole, exciting. There are plenty of things to learn and experiences to be had. A new environment is refreshing, some may even say, “a clean slate.” Not me though, I don’t like non cat related memes….