A TERMINALLY-ILL father is desperately raising funds to travel to Malaga for revolutionary cancer treatment.

Diagnosed with a rare form of stomach cancer, father-of-two Adrian Hosken is determined to live until 2025 so he can celebrate his daughter’s 10th birthday.

To do so he is trying to raise funds to attend the €7,500-a-week Budwig Cancer Centre in Malaga to prolong his life.

In fact, just a week after launching a GoFundMe petition the 39-year-old British resident, who lives in Kent, has received over €31,000.

“The most amazing thing is the number of anonymous donors or the donations from people we have never met,”Adrian’s wife Angela told the Olive Press.

“The treatment the Budwig Centre offers is not readily available in the UK and could be the missing piece of the puzzle that Adrian needs.

“Everyday is a new challenge, he has his good days and his bad days.

“When he can muster up the strength he plays football with our three-year-old son Noah, but that may leave him needing bed rest for two days after.” 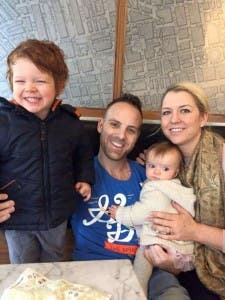 Adrian, a business development manager, first went into hospital in 2011 with what doctors believed was appendicitis.

But the next day his appendix – which was riddled with cancer – burst spreading the disease around his body.

With 90% of patients diagnosed with this type of cancer dying within five years, Adrian has already defied the odds.

Determined to live until at least 2025, Adrian set his goal after watching a documentary where a 30-year-old woman could barely remember her father, who died when she was 10.

As a result he vowed to live until 2025 when his nine-month old daughter Adriela will be 10 and his son will be in his teens.

“It breaks Adrian’s heart to think his children won’t remember him,” Angela said. “The kids are too young to understand what is going on.

“He just wants to be the best dad he can be.”

She added: “He sets himself goals and takes each day as it comes.

“His next big goal is to celebrate his 40th birthday in October. We are hoping to travel to South Africa where most of our family still lives but Adrian needs to get better for that to happen.”

Adrian is hoping to undergo immunotherapy at the Malaga clinic for a week in August to boost both his Vitamin D level and his immune system.

If successful they aim to come back for longer.