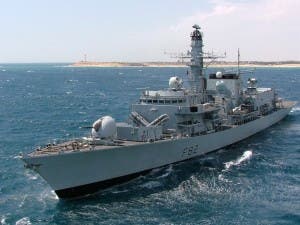 THERESA MAY has been advised to send Royal Navy warships to Gibraltar to ‘protect it from Spain’ during Brexit negotiations.

Former Ministry of Defence special adviser Luke Coffey said it is necessary to stave off Spain’s plans for joint sovereignty of the Rock.

He said: “Theresa May, Boris Johnson, Liam Fox, Michael Fallon, and David Davis should make a joint visit to Gibraltar as soon as possible.

“To show that this is an issue of national importance, members of the Shadow Cabinet and representatives from other political parties in Westminster should be invited to join as well.

“The Ministry of Defence should also make a grand gesture by increasing the Royal Navy’s visible presence in Gibraltar.

“This would send an important message to the Gibraltarians.”

Leaders in Madrid wasted no time in demanding joint sovereignty of the British territory, calling for it on the very same day the EU referendum result was announced.

Spain’s Foreign Minister  Jose Manuel Garcia-Margallo added that the result meant a ‘complete change of outlook’ over the disputed territory, despite an overwhelming majority of its residents having repeatedly voted to remain British.

Coffey, writing on the Conservative Home website, added: “The UK needs to prepare for the worst.

“This could include maintaining a robust air bridge if the land border is closed.

“Also, in the event of a border closure by Spain, the UK must be prepared to respond with appropriate, firm, and proportionate measures against Madrid.”