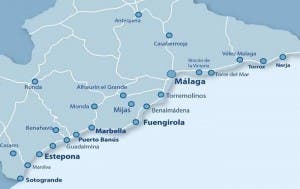 As the marathon to link 14 Costa del Sol resorts with the longest footpath in the world passes the halfway stage, Lance Rutkin jogs through the need-to-knows..

NICE has its Promenade des Anglais, California has Venice Beach and southern Spain will soon have its own marathon walkway running the length of the Costa del Sol.

Providing a bracing non-stop coastal stroll, bike ride or jog from Nerja’s Balcony of Europe to the sands of Manilva, it will make Atlantic City – the world’s longest boardwalk at 7km – look like a dander in the park.

When completed, La Senda Litoral will stretch for a heart-racing 160 km, putting the coast into the Olympic champions league for fitness challenges.

Over 65% of the ambitious project is now in place with fresh air fiends already walking the planks. The aim is to connect the whole of the azure coast, from Axarquia in the east to Castilla de la Duquesa in Manilva with a scenic footpath.

A Malaga Province initiative in concert with the Junta de Andalucia and the 14 municipalities it connects, one of La Senda Litoral’s greatest transformation can be seen in Mijas, where just under 5km of work has been completed since the beginning of the project in 2014.

And the biggest change is the new 3km strip linking the rocky shoreline from La Cala via Playa del Bombo to Riviera del Sol. In the evening when the coastal ridge shields the beach from the sun, sporty sorts can jog, walk and cycle in shade while families have far easier access to the sands and rock pools beyond the rugged coast.

Nothing says summer like the feel of sand and wooden decking beneath your feet while in winter it’s a great vantage point for watching the turbulent waves battering the rocks below. The varnished wood structure rises and falls as the terrain demands, providing a smooth and seamless experience. 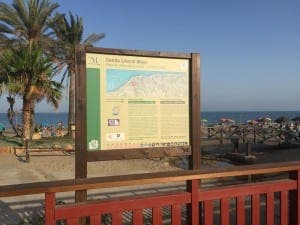 Retiree and 10-year La Cala resident John Steadman delights in the refreshing and healthy change of lifestyle the walkway now offers his doorstep.

“This is what I imagined when I moved to Spain: a glass of wine and a nice walk on the beach,” he enthused.  “You can’t top walking on the shore with the breeze in your hair and the sound of the waves crashing beneath you.

“I’m really excited for when the walk will go up to Fuengirola. It’s just a pity so many take along their dogs, even though I do like canines,” he added.

And as well as a health boost for the local population, the Senda Litoral is expected to prove a runaway commercial success. 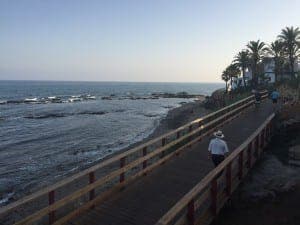 One study by Costa del Sol Tourism estimates that the new boardwalk will create 400 jobs and give the area a €40m economic boost.

But despite this mammoth financial incentive, La Senda Litoral still has a long way to go with some 64 kilometres to complete before it reaches the finishing post. And a quick study of the facts and figures shows that the work has not exactly been a race against time.

According to figures obtained by the Olive Press from Malaga’s provincial government, while 28% of the walkway is at some stage of construction, another 10% remains completely unplanned.

And although 96 km is traversable today, most of it (around 84 km) was walkable promenade before the project began, such as Estepona’s beachfront strip running from the port to Buena Vida.

Do the math and you discover that, since 2014, the amount of completed work stands at a paltry 12 km.

However only four municipalities still have sections completely devoid of planning with Marbella having the greatest amount of work to do, followed by Mijas, Estepona and Malaga.

Malaga Town Hall press office had no information on future progress and the other three municipalities did not respond to requests for comments.

But with a further 44 kms not too far off completion, it’s still a mega attraction worthy of Guinness record book status and  already focusing the attention of the sporting and holidaymaking world.

Could we see Olympic athletes coming to the Costa to brush up for the 2020 Games in Tokyo? Watch this space!