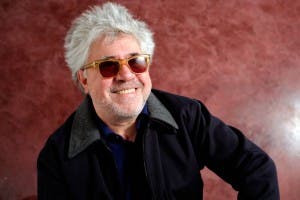 It is the first time the film has been shown abroad, and a showing in New York is scheduled for later this month.

Adapted from several of Canadian author Alice Munro’s short stories, Almodovar claims to have changed his style in order to match the ‘pain of the story’.

“I used to make a lot of melodramas, I mean dramas with a lot of humour, music and strange situations,” the Oscar-winning director said.

“But in this case, there is so much pain in this story that I wanted to make it in a more softer way.

“It was something new for me and it’s related more with a dark drama than with melodrama.”

The plot follows a single mother drifting into depression as she searches for her missing daughter and discovers much about her traumatic past is not what it seems.

Debuting his 20th film, Almovodar looked back on his own career, saying he ‘had dreamed of being a director’ since childhood.

He also claimed that his country’s diverse culture and rich history was ‘at the heart’ of his work.

“In the 80s I was starting out, and also the country was starting in a new period – it was the moment when the Spanish democracy birth again,” he said.

“It was a decade full of passion, full of freedom and it was a big explosion, it was a unique moment in the history of my country.”

The film opens in cinemas across the UK on August 26 and hits the United States on December 21.