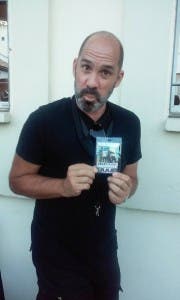 I’M a huge live music fan. Back in my teens I fancied myself as the sensitive singer-songwriter type and regularly used to inflict my acoustic guitar versions of The Police and James Taylor numbers on an unsuspecting and generally unimpressed audience.

Thankfully for music lovers everywhere, I eventually realised that I was never going to be the Costa del Sol’s version of Sting and haven’t picked up a plectrum in public for years.

These days, the nearest I get to performing live is frantic air drumming on my radio show when I sneak in the occasional Foo Fighters’ track.

Although I never made it live on stage, I’ve spent plenty of time behind the curtains as I tend to get roped into production at any number of Costa gigs.

I’ve been spotted dashing manically around backstage for everyone from Madness to Seal to Deep Purple.

As a freelance editor, I’m used to tight deadlines, constant stress and huge egos, and working with famous musicians multiplies this by a factor of around 70.

Putting on a concert on the Costa del Sol involves crisis management and chaos theory at all times, with a huge slice of Murphy’s Law thrown in for good measure.

There was the all-girl group who almost refused to go on stage because their driver (who was told to stay silent) had asked them to sing Happy Birthday to his mate down his mobile.

Or the time that a (different) limo driver reversed into blind singer Jose Feliciano and shouted ‘Didn’t you see me?’.

Or the Rock Gods who wouldn’t stay in certain luxurious hotel rooms because the room numbers were unlucky.

Big stars tend to have a support network of personal assistants who can also be tricky to work with.

We were warned that we couldn’t speak directly to one singer, and when the aforementioned star asked out loud what the time was, one of the production crew was shoved out of the room when she started to say ‘It’s ten past…’

But despite huge egos, stress and lack of sleep, there are still some hysterical moments.

Like the time the President of Ghana showed up to a concert and brought his own security, without bothering to inform us that he had put snipers on the roof.

That led to a VERY interesting conversation/armed standoff with the none-too-impressed Guardia Civil on a lighting gantry 80 foot on the air.

One of my best moments came with the great George Benson (who is brilliant to work with, by the way, and even helped me lug a sound bag on stage).

It was the afternoon of the concert and I was in the middle of buying ham, cheese and bread for the crew, who were busy building the stage. Suddenly the promoter rang. ‘Giles, have you seen George?’

I was hot, tired and irritable and shot back, ‘Not unless he’s moonlighting behind the cheese counter at Super Sol!’