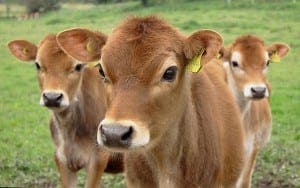 A SMALL Spanish town has been criticised for alleged cruelty to animals after video footage surfaced showing young calves being taunted, stabbed and killed during its festival.

The political group has released footage of Valmojado Toledo residents taking turns to spear a number of calves inside the town’s bullring.

The video has sparked such outrage that the town hall has been forced to remove both its Facebook and Twitter pages due to an avalanche of criticism.

The event – known as a becerrada – takes place every August where residents are pitted against calves aged between one and two years old.

Valmojado, southwest of Madrid, released a statement defending the spectacle, which it said is a legitimate part of the country’s bullfighting culture.

It also lambasted the insults and abuse it says it and its residents have received since animal rights group PACMA released the video online.

The video shows young people in a bull ring taunting calves with bull-fighting capes and sticking lances in their backs.

One is stabbed with a sword in matador fashion and another is finished off with a knife.

The town hall said it wished to “reiterate our absolute rejection of all types of animal mistreatment,” adding that it was seeking legal advice regarding the insults, which it said “tarnished the good name of Valmojado, its history and traditions.”