AN Olive Press expose into a gang of suspected con artists has featured on Holland’s main TV channel, NPO1.

They are accused of running a string of property scams and frauds in both Spain and Holland.

In total, they are said to have possibly swindled dozens of victims out of millions of euros.

At least 22 new alleged victims have come forward since we revealed how the gang allegedly conned German expat Peter Wicke, this year.

Wicke told us how Brinkman had conned him in a bogus €5million film financing deal.
Brinkman and his wife Johanna Te Riet have been spotted in Puerto Banus and Marbella over recent weeks. 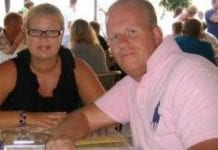