THE Romans were the first civilization to experience a coastal real estate boom, and it’s no wonder the who’s who of AD life chose to settle in Andalucia.

From one of a kind mosaic floors to historic baths, our long gone relatives have left plenty of clues to tell us how they lived and what their property portfolios looked like. 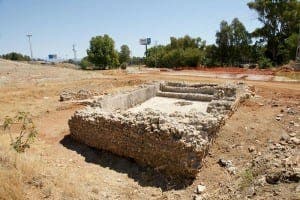 THIS once bustling Roman settlement near Los Alamos beach in Torremolinos was an important fish-salting plant.

The site is thought to be more than two thousand years old, with several tanks for salting fish, a spa complex and a storage area with two large pottery kilns dating back to 100BC also being discovered.

The Romans learned the salt-curing method from the Greeks, and it is still widely used today. 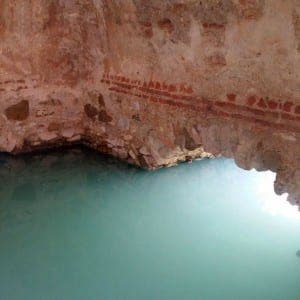 PROOF of Roman dwellings can be found at the newly renovated bathing pools in Casares.

The town hall has created a new outdoor bathing area in a bid to preserve the historic site, by building two walls in the channel leading from the bathing room to the adjacent river.

It is believed that Caesar himself came to the baths and the sulphuric water relieved him of a skin complaint. It is from him that the name Casares originates.

THIS 5,000-year-old village was first discovered in 1891 and is still being excavated today.

The two-hectare site comprises of a cluster of small homes lying inside its elaborate pattern of walls.

Although the people here were primarily farmers, they had crucially learned metal-working, in particular the smelting and forming of copper.

The site is considered highly important in understanding the transition from the Neolithic to the Bronze Age, as the Los Millares culture eventually came to dominate the Iberian peninsula.

THESE extensive walls, or murallas, began construction under the Moors in the 13th century, who were trying to keep out the Christians.

Proving unsuccessful, the Christians had a turn at renovating them following their takeover in the 16th century, and even today parts of the walls are being restored.

The walls have long protected the beautiful centre and only two paths, two gates and one bridge offer routes in and out. 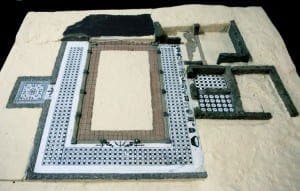 IT seems ‘Marbs’ began attracting the wealthy more than 2,000 years ago.

This ancient villa, 1km west of Puerto Banus, was once part of the great Roman city of Cliniana and is made unique by the stunning mosaic floors left behind, which suggest the owner would have been of great importance.

A turn from the traditional classical themes and intricate details, the famous black and white patterned tiles  – never before been seen in a Roman villa – display a collection of images in black and white, from shoes to kitchen utensils and the infamous Medusa. 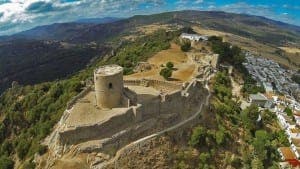 ONE of the Roman empire’s most important settlements is thought to be lying under the soil in Jimena de la Frontera.

Archaeologists have begun digging up what they believe to be a Roman ‘nerve-centre’.

Originally uncovered by retired archeologist Hamo Sassoon when he retired to the Campo de Gibraltar, the excavation work could re-write the history books.

A complex series of walls, strategically placed castle and layout of the town were ‘obvious giveaways’ to Sassoon. 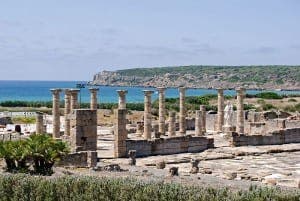 THESE ruins some 15km north of Tarifa reveal a once highly strategic and wealthy Roman town.

Vital to the trade routes serving Europe and North Africa, its position on the coast near the Straits of Gibraltar made it a crucial stop-off point.

The town made most of its wealth by supplying the popular delicacy du jour, a fish paste known as garum, to the whole of the Roman Empire.

The town, named by Emperor Claudius, who reigned from 41 to 45 AD, boasted a Basilica, Theatre, thermal baths, aqueducts, lucrative salting factories and the Temple of Isis. 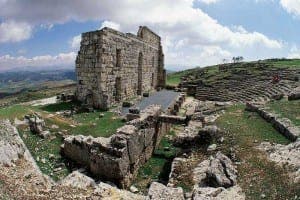 CREATED by retired soldiers from the Roman legions more than 2,000 years ago, Acinipo boasts some of the most well reserved buildings, with its Roman theatre still in use today.

The 32 hectare city thrived in 1 AD when it had a population of 5,000, even printing its own money which featured bunches of grapes.

Its famous theatre, which is thought to have begun construction in 65 AD and been completed in 200 AD, seats 2,000 and remains in good condition, boasting an orange tiled orchestra pit and actors’ changing rooms, while a modern steel stage has recently been added. 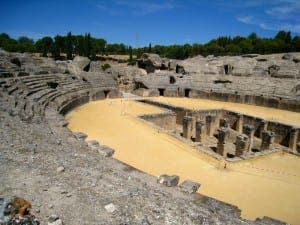 Just 9km north of Sevilla sits the ruins of Italica.

Founded in 206BC the town became an important centre of Roman culture and was later the birthplace of three Roman emperors, Trajan and Hadrian and Theodosius .

The town thrived particularly under Hadrian and has been survived by a huge amphitheatre and twenty mosaics, including a  highly detailed coloured floor featuring birds, Netpune and the seasons.

Alex Trelinski - 24 Jan, 2022 @ 18:06
POLICE are investigating the theft of two Salvador paintings from a Barcelona apartment. The Mossos d'Esquadra were contacted on Sunday afternoon by the home owners. They...