FLAMENCO star Estrella Morente is set to open a toro-themed hotel in the Ronda area.

The stylish singer is designing the hote 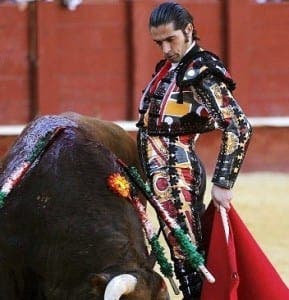 The Granada star has teamed up with Malaga-born Conde to develop the ‘cortijo-style’ hotel, that will have seven bedrooms, all linked in some way to the bullfighting tradition.

The three-star hotel, which will be 800-square metres in size, is to be built in a rural area a few kilometres from the town, near the stunning Tajo del Abanico cave.

The 700,000 euro project will count on its own mini-bullfighting ring, as well as a small museum into the bullfighting tradition.

It was expected to get the green light from Ronda town hall this week.

The town hall’s public works boss Francisco Marquez confirmed that the couple had applied to build the hotel some time ago and that so far it had met all the legal requirements.

The Olive Press can reveal that the pair have been looking to buy a project in the area for a number of years.

“They have been looking around the Serrania at hotels and properties for years,” revealed a source. “They love the amazing landscape and believe it will be a popular business.”

Ronda is often dubbed Spain’s spiritual home of bullfighting having Spain’s oldest ring and having spawned a number of leading bullfighters.

Orson Welles and Ernest Hemingway spent a lot of time in the town studying and writing about the art.

Ronda is also to become the home for a key project by famous French designer Philip Starck, who is hoping to open an ecological olive mill just outside the town.

The Almazara LA Organic project features a main building with the face of a bull.

The project, which sits on 22 hectares of land, is currently being redesigned, as it was believed to have been too large for the area.

Alex Trelinski - 11 Aug, 2022 @ 17:39
A Denia police patrol boat rescued two boys on Wednesday who were drifting out to sea on a windsurfer. The youngsters had one oar and...