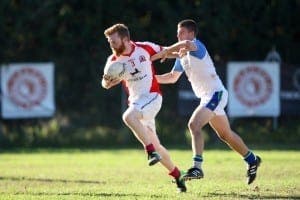 MARBELLA-BASED Gaelic football team the Costa Gaels are gearing up for the Andalucian Championship season opener against Gibraltar Gaels.

Lining up at the Marbella Rugby Club on October 1, both teams will be looking for a strong start to the season as they attempt to take the Andalucian trophy from last year’s winners Eire Og Seville.

As club sponsor Healy Mac’s manager Chris Day presented the kit to the team during the all Ireland Gaelic football final between Dublin and Mayo.

“It is great to have the support of Healy Mac’s,” Costa Gaels secretary Tom Marray said. “It makes a huge difference to have their support.

He added: “We are raring to go and can’t wait for the season to begin.

“We have been training hard and are going to have a big push to win the league this year.”