A BRITISH mother drowned in front of her husband after four Spanish lifeguards said she was fine because she ‘wasn’t waving her arms around frantically enough’.

Julie Dudhill, 57, from Hampshire,  was swept out to sea in Alicante on June 27 after drifting just a few yards away from her electrician husband Andy, 51.

Andy rushed back to shore and alerted the lifeguards, but they said she was not struggling because ‘she would have been waving her arms about more.’

Even though she was crying for help, the lifeguards ‘did not seem to think she was in danger,’ Andy told an inquest at Basingstoke Coroner’s Court in the UK.

It was only when Andy decided to try and save his wife himself that one of the lifeguards tried to swim out to her.

It was too late, however, and her lifeless body was brought back to shore.

Andy criticised the lifeguards at the inquest.

He said: “We are keen beach-goers and surfers, and have been for 18 years or so. It’s always been a choppy beach with a few waves but nothing that we felt was too dangerous.

“About 4pm or 4.30pm we went down for one more swim. We usually go where people are swimming and after about 20 minutes we decided to get out.

“I turned around and she was literally just behind me as we were getting out but in that short space of time afterwards she had difficulties getting back to the shore line and she said to me she was having difficulties.

“She was calling out and luckily in front of me were two lifeguards and I was nearly out so I quickly went up to them and told them she was getting into difficulty.

“They didn’t react and stayed on the shore line. They suggested to me that if she was having difficulties she would be waving her arms about more. 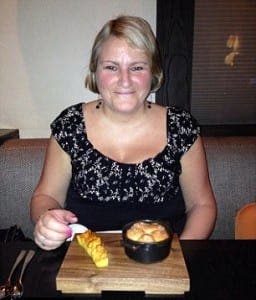 “By that time, which felt like five minutes later, two more lifeguards turned up and she was waving at them but they were under the impression she was OK.

“They seemed to think she was not in danger despite what I was saying to them. She was calling out to them. I can’t understand why they didn’t react faster.

“I could see the lifeguards were not doing anything so I went in but one of them called me back.

“Then one of the lifeguards took a leisurely swim out to her. The next thing I know the lifeguard is saying she needs oxygen. By the time they brought her back I just knew it was too late.

“She was brought back to the shore line, they gave her CPR and an ambulance was called but it seemed to take an age to turn up. They worked on her for about half an a hour or 45 minutes – by then it was already over.”

He added: “It’s dreadful from the lifeguards, especially when it’s on a crowded beach.

“I can’t understand why it happened with four lifeguards there. It’s bizarre as she’s a strong swimmer and medically fit, but it shouldn’t have happened.”

The coroner recorded the death as accidental.