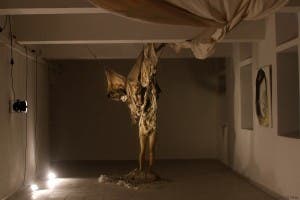 A FORMER womens’ prison from the Franco era has been transformed into an art gallery.

The exhibiting artists have all worked with the themes of suffocation, isolation and resistance.

One installation features a series of painted portraits of women who lived in the prison, and a sculpture of a distorted female figure partially covered in blackened sheets.

The piece, named In rem scripta and located in one of the larger cells of the prison, is described as a tribute to the hunger strikes organised by the prisoners in the 1940s and 50s.

The hallways and cells are adorned with projects exploring the notions of violence and loneliness.

The exhibition, titled Galerias, will run until October 16.