RELATIVES and henchmen of Syrian president Bashar al-Assad have been enjoying and flaunting luxury lifestyles in the West.

While his compatriots are engulfed in a bloody civil war, uncle to Bashar, Rifaat al-Assad, flits between his nine-bedroom house in Mayfair, London and his mansion in Marbella’s exclusive Gray D-Albion estate.

Rifaat is suspected of acquiring his wealth through illegal means and has had his assets in France – worth around €100m – frozen by authorities.

But while he continues to face probes, his assets remain active in the UK and Spain.

Meanwhile, his son is enjoying the scenes surrounding his eight-bedroom luxury home in the Crown Estate in Oxshott, Surrey.

But it’s Akram Ojjeh Junior, the grandson of Mustafa Tlass, the former defence minister who fled Syria at the outbreak of the war, who has the least qualms in flaunting his enviable lifestyle.

Akram regularly posts pictures to his Facebook and Instagram accounts showing him driving Bugattis and Ferraris and posing with Kalashnikov machine guns. 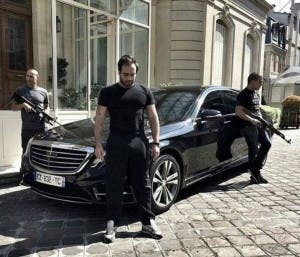 His mother, Nahed Ojjeh, who inherited a large wealth following the death of her Saudi arm-dealing husband, is now well known among Paris as a hostess of grand parties.

The pair appear to have settled in comfortably to the city’s socialite scene.

Chris Doyle, director of the Council for Arab-British Understanding, said:

“Rifaat al-Assad, Mustafa Tlass and Abdel Halim Khaddam were the kingpins and founding godfathers of the brutal Assad regime that has decimated Syria for decades.

“Having fleeced Syria for so much wealth, it is galling to Syrians to see them flaunt their ill-gotten millions all across Europe while millions of Syrians languish in refugee camps.”