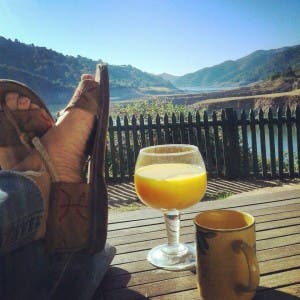 THIS month I celebrated five years since I moved into my own little slice of paradise, otherwise known as El Casita del Lago.

I was going to call it EL Refugio del Loco at one point, but I decided against it. If you have been reading my witterings for the past couple of years, you’ll know that the Casita is my cottage that sits in splendid isolation on a lake in the hills above Marbella.

It’s one of only two that actually have lake frontage, though with the lake actually being a reservoir, the term ‘lake front’ can mean anything from right at the bottom of the garden – and I have kayaked to the duck gate when the lake is full – to a good 20 minutes walk away during the very dry summer of 2014.

That was the year when the houses that were submerged after the reservoir was completed in 1970 under orders from Franco started to reappear, perfectly preserved in alluvial mud. (Your everyday Fascist dictator likes a grand public works project or two. See also autobahns and draining the Pontine Marshes).

It was also the year that every bugger with a cross bike, buggy, quad and 4×4 decided to use the dry lakebed as a testing ground, turning my terrace into the main grandstand for the manic ‘Mad Max meets the Dakar’ chaos that ensued.

The dust clouds did little for my washing, and I took a perverse pleasure every time someone got stuck in the mud.

With no Wifi, phone line, TV, electricity or mains water – I use a generator and pump water from the lake into a deposit tank – I’m basically living in the 17th century but I’m more than OK with that.

The track to get to my place runs along the edge of a steep drop, and has been described as a bit ‘Temple of Doom’. I’ve yet to lose a passenger, although one did 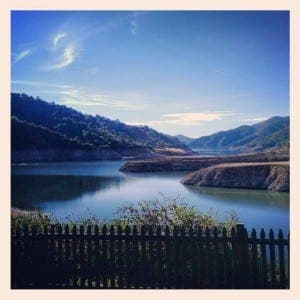 grip my knee and scream loudly while another curled up in the back in a fetal position and refused to look out.

And it has lead to some interesting conversations, including the night I brought a young lady back to the Casita to the first time.

She grew increasingly quiet on the way up and went silent as we pulled off and started heading down the track.

As we rounded a bend, she looked out to see the Casita, all alone in the moonlight, by the edge of the lake and surrounded by woodland. Your basic psycho killer territory.

She looked at the house, looked and me and then uttered the immortal line “You know. I don’t really know you that well, do I?”
“That’s what all the others said” I laughed, manically!