A FEW years ago, I was having a laugh with an Australian woman I worked with and she said “you should meet my brother some time. You’d get on really well. He’s a knackerteck.” 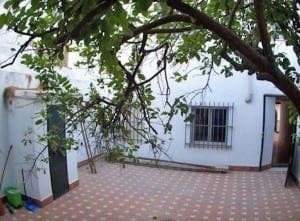 She said “he’s a knackerteck.”

Her accent was broad and it took me a moment to figure out she was saying “he’s an architect”.

So I met her brother and, yes, he was a nice guy.

Decades earlier, in my youth, I lived in a fairly wild houseshare in London. The only person in it who had a proper job was an architect. He worked for a famous company in Chalk Farm and hated it. He later packed it in to become a hippy, earning a crust from stitching leather saddlebags.

And that was the sum total of my knowledge and experience of architects. Not the best grounding for finding and choosing one to help me rebuild a house in Jerez de la Frontera (click here for the backstory).

I didn’t really know how to begin, so I did what anyone would do these days: I googled ‘architects Jerez’ and found a few. Then I set about writing an email, to tell them what I was planning and ask if they’d be interested.

My Spanish isn’t great. I can get around the shops, buy myself a maceta and tapas in a bar, hold basic conversations and that’s about it. Still, with the help of Spanishdict.com, I cobbled the email together. I showed it to a Spanish friend of mine. She roared with laughter. But the architects seemed to get the gist.

Three of them replied. I knew I had to start a planning application with the council and I mentioned to the first one who replied that I’d made an appointment. He said he’d meet me at their offices and help me.

I don’t know what I expected an architect to look like, but somehow he didn’t look like one. He just looked like, you know, some bloke. But he assured me straight away that he knew his way around the process. “It can be very difficult but if you know the people it is easy,” he said with a huge wink.

The office was just opening and the council people were turning up for work. He gave a big “hola” to all of them as they passed, but their response was either vague or non-existent. “Yes, everyone knows me here,” he said. 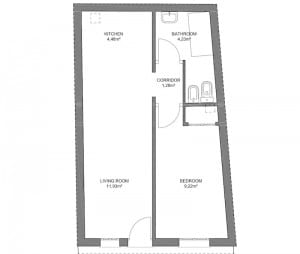 We sat down with the council guy. I had a floor plan of the property and I showed him it.

Quite efficiently, the guy summoned up the council version of the floorplan on his computer. After comparing the two for a while, he said “there’s a problem.”

The measurements on my version showed a larger dwelling than his did. “What does that mean?” I asked.

“I’m sure there’s a solution,” the architect said, giving the guy a meaningful nod and winking at me so hard, I thought he had sand in his eye.

He followed that up with a semaphore series of winks as we parted company. “Don’t worry, I can always find a way,” he told me. I decided I wouldn’t be using him.

The second architect, who came to visit the site, looked much more architectural. Tall and imposing, he wore an expensive overcoat, a fedora hat, and some elaborately barbered face furniture. I had the feeling he was aching to go the whole hog and cultivate a full Salvador Dali waxed tache, but he’d stopped just short of that.

He had a small platoon of young assistants, who watched reverently while he strode around the place, smoking his little cigar. “Very interesting,” he said. “We’ll be in touch,” and off he swept.

The third one was a young lad (at least he seemed young to me – he’s actually in his early thirties) called Rafa, who works in his father’s practice. He sent me an enthusiastic email, politely overlooking my mangled Spanish and saying he really liked my ideas. He lived in the same barrio of the town, San Miguel, so he had a feel for it. Better still, he spoke good English.

He came to see the place with his dad, who was the first one to do that classic building trade expression – the weary, disappointed look, the sharp intake of breath, the sucking of teeth, the dear-oh-dear shake of the head.

My plan was to build a second storey on top of the single-storey building, but he declared it impossible, pointing out a substantial crack I hadn’t noticed. “This wouldn’t bear the weight of another floor above,” he said. “If you want to build two floors, you’ll have to knock this one down and start again.”

It wasn’t good news, but it seemed to make sense. The job was theirs.

The first thing Rafa did was to go on his own to see the planning guy again. He called me after his meeting, with even worse news.

“You know how their plans show a smaller building than yours?” he said.

“Yeah,” I said, getting that impending doom feeling.

“Well they’re saying you’ll have to knock it down …. and build a smaller one! Same size as theirs.”

What!? The place was already tiny. The words that passed through my mind at that moment are not suitable for reproduction here.

“But don’t worry,” he said. “We can appeal. I tell you what, come to our office and we’ll see what we can do.”

So I went round there and while we were sitting talking, his dad came in and joined us. After listening for a while, he suddenly said “this sounds familiar.” He went away and came back a few minutes later, with a dusty, rolled up plan. 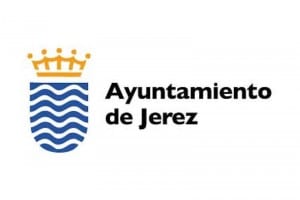 By incredible coincidence, he had drawn up the original plans to turn the house from a single family home to a casa de vecinos – in 1988. It included my little place at the back of the building. And the plan had that all-important, formal stamp of council approval. I could have kissed it.

They phoned the guy at the council, who was relaxed about it. He said “OK, whatever, carry on.” it must have been getting near lunchtime.

Footnote: A full eight weeks after I’d started work with Rafa and his dad, one of the elegant architect’s glamorous assistants emailed. Apparently the big man had a few more questions to ask before he submitted his proposals, and wanted to come for another look. My reply was brief and to the point.

IN PICS: A look at the legacy of Ricardo Bofill, the Spanish architectural genius who died in January