A DECADE ago, in November 2006, the very first Olive Press hit the streets. 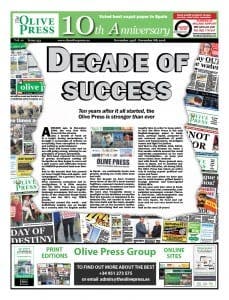 Like a breath of fresh air in a turgid, boring marketplace, it brought a cornucopia of articles on everything from corruption to crime and eating to entertainment.

More than 250 issues later and we are still going strong, sticking to our principles of proper journalism.

Our first issue exposed the travesty of greedy developers cutting off footpaths as they began to carve out a golf course and 1,000-plus houses on UNESCO-protected land near Ronda.

And in the decade that has passed we have fought time-and-again – and campaigned – for a greener, less corrupt Andalucia.

After numerous exclusives and investigations, it is little surprise that the Olive Press has evolved into Spain’s number-one English-language newspaper. Not our words, those of the respected Rough Guide group and the UK’s key TESCA awards.

Respected around the world – and definitively number one on Google by a country mile for English media in Spain – we continually break new ground, making our rivals slink back and sulk.

Over the decade we have tracked down three of the UK’s most wanted fugitives, exposed crooked conmen, animal abusers, fraudsters and bent lawyers and agents.

We have also frequently shone a spotlight on the insidious corruption that has became so ingrained in Andalucian life, not scared to take on the town halls and the Junta, despite missing out on the lucrative institutional advertising that our rivals so happily take in order to keep quiet.

In fact, the Olive Press is the only English-language paper in Andalucia, perhaps Spain, prepared to ask awkward questions of politicians and businessmen, investigate scams and fight for justice.

And that is why British, Irish, Dutch, American and German (to name a few) media outlets around the world repeatedly commission us for work and investigation… so keep your noses clean, dear readers!

And with Brexit, three general elections in Spain, not to mention tensions with Gibraltar, all during 2016, the Olive Press has taken an active role in voicing expats’ political concerns and fears.

In the last year alone we have spoken to world leaders, grilled Spain’s foreign minister and interrogated British MPs.

We are your only true voice in Andalucia. The only real, community, campaigning newspaper around. Fiercely anti-racist, anti-homophobic and pro-expat rights.

We love Spain, its food and culture and we are very much here to stay.