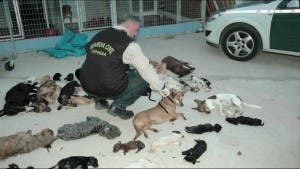 A WOMAN first exposed by the Olive Press is accused of slaughtering more than 2,100 cats and dogs at a Costa del Sol animal shelter.

Carmen Marin’s animal shelter in Torremolinos was meant to be a haven for unwanted pets.

But a court has heard that between 2008 and 2010 Marin and assistant Felipe Barco injected the animals with drugs that caused a slow, agonising death.

In 2012, the Olive Press first revealed a police probe into Marin, as well as a close relationship between her and Torremolinos Town Hall.

Court documents showed she made a series of unexplained payments totalling over €50,000 to ex-mayor Pedro Fernandez Montes’ brother.

PAW FOR HELP: Exclusive on Ukrainian pets looking for help in Spain