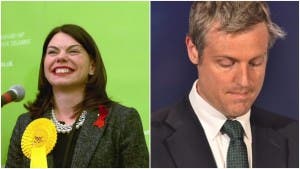 ZAC Goldsmith’s loss in the Richmond by-election in London could force the UK government to opt for a softer Brexit.

Sarah Olney from the Liberal Democrats – a pro-EU party – won the election with a stunning swing of 23% from Goldsmith in what was dubbed the ‘Brexit by-election’.

It prompted the government to release a statement insisting that ‘this result doesn’t change anything’.

“The government remains committed to leaving the EU and triggering Article 50 by the end of March next year,” it read.

Goldsmith, who had campaigned for the Leave campaign, struggled to woo voters in the staunchly pro-EU London borough.

Olney said after winning: “It does look now as if we can have a vote in Parliament that might override the referendum. And I will, obviously, be voting to Remain because that is always what I have believed.”

Analysts have said the result – now part of a wider trend of Lib Dem resurgence – could leave Conservative MPs in marginal seats nervous about the impact of a hard Brexit on their futures.

Some 48% of voters who chose to remain in the EU are disproportionately represented in Conservative and Liberal Democrat marginal seats.

The current course towards a hard Brexit could therefore result in several repeats of last night’s by-election.

It could also encourage Remain-leaning MPs to be more confident in demanding a vote on Article 50.