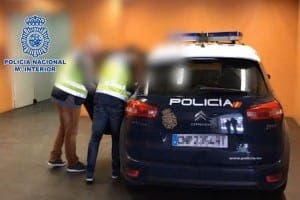 A BRITISH paedophile who fled to Malaga while under a European arrest warrant  has been arrested by Spanish cops.

Officers found and arrested the man in Benidorm less than 24 hours after the warrant was issued on November 27, it can now be revealed.

It is reported that he made friends with the parents of the victims, who then left him in the company of their sons.

The Policia Nacional have said the parents were unaware of what he was doing to the boys.

He faces sentences of 48 years in prison and life imprisonment for six counts of rape and several other charges relating to sexual assault and other offences.

The man, who was living in Malaga, had already been detained on child pornography charges before the European Arrest Warrant was issued.