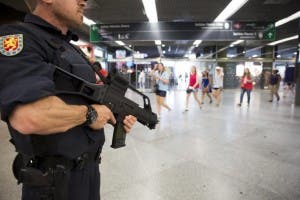 SECURITY forces will strengthen their presence in the face of New Year terrorist threats.

The Policia Nacional is working with local forces to bolster visible patrols in city centres such as Madrid, Barcelona and Sevilla to deter any unexpected Jihadist attack.

More officers will be put on guard at principal airports, bus and train stations and emergency action plans will be revised, thanks to a dictum by Juan Ignacio Zoido, Spain’s interior minister.

He also appealed to local governments to do their bit by focusing on safety at organised public gatherings, following the upgrading of  the country’s terrorism threat level to the high level four.

Zoido said that while there was “no concrete evidence that there may be a jihadist attack in the country” it would be a folly to adopt a ‘triumphalist’ attitude.