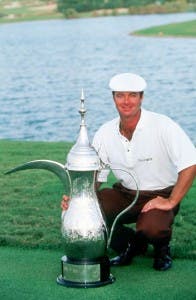 THE golfing world has been left in shock after a former European Tour player took his family hostage before killing himself in front of his wife.

Wayne Westner, 55, reportedly forced his way into the family home in South Africa following a recent separation from his wife.

His wife and children are said to have locked themselves inside a bathroom after he demanded to see her.

South African Police Service spokesman Lieutenant Colonel Thulane Zwane said:”He allegedly wanted to see his wife and thereafter he allegedly shot himself.
“The firearm used in the commission of the crime was seized by the police.”

Westner won two European Tour events and captured the 1996 World Cup of Golf with fellow South African golfer Ernie Els before his career- which earned him at least €1 million – was interrupted by injury.