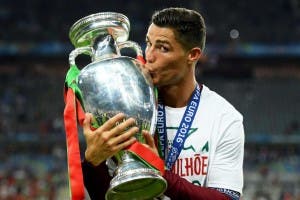 CRISTIANO Ronaldo says he feels ‘blessed’ to still be signing bumper contracts after allegedly being offered €300 million from a Chinese Super League club.

The 30-year-old’s agent Jorge Mendes claimed this week that Real Madrid received an extraordinary offer from the unnamed club.

Had the sale been agreed, the Portugal captain would have reportedly been offered an eye-watering annual salary of €100m.

It comes after Chinese clubs signed Chelsea’s Oscar and Carlos Tevez of Argentina for €70 million and €80 million respectively.

But Ronaldo is said to have had no interest in leaving LaLiga, with the 2016 Ballon d’Or winner considering himself fortunate to still be commanding big wages and endorsements.

“My target is to maintain [my level],” he said.

“I have a few more years to play football. I signed a great deal with Nike and Real Madrid.

“I’m glad and blessed to sign these huge contracts at my age. It’s unbelievable. It’s going to give me more motivation to continue working hard and maintain my level.”

Elena Gocmen Rueda - 6 Dec, 2021 @ 15:45
THE most listened to artist on Spotify Spain during 2021 has been Puerto Rican musician Rauw Alejandro, the music streaming platform has revealed. The Reggaeton...