A BRITISH student claimed second place in a national photography competition for his image of Spanish bulls.

Oliver Riley, 19, was runner-up in the Calumet Student Photographer of the Year 2016 competition for his shot of the Running of the Bulls in Pamplona.

Oliver, who studies at Bath Spa University said: “A lot of thought and planning went into the image as I had to spend a lot of time researching where the best place would be to capture the shot, what street I should be on, at what height I should be and at what time.

“You have about 10 seconds to take the picture, so you’ve really got to get it right and so I was quite nervous.

“Also, I was hanging out of the balcony window, with the owner of the apartment – who I didn’t really know – holding onto my legs so I could get the shot.

“So all the hard work paid off as being named a runner-up has made me proud and very surprised.”

The first-year student is hoping to pursue his photography career, specialising in animals and wildlife. 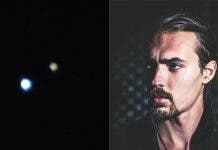