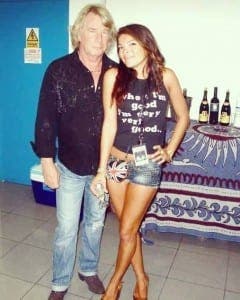 IN my first entry of the Marbella Diaries, I had planned on telling you about the Nightmare that was Christmas.

I was going to touch on the dramas and disasters, family feuds and sibling squabbles, the burnt food (I mistook the brussel sprouts for roasted chestnuts such was their charred appearance, which provoked yet another uproar as everyone proceeded to argue about the correct manner to cook sprouts!).

I was going to describe the Lego underfoot, the light sabre sword fights, screaming children, mess, noise, mayhem and madness that arose from a week of living with almost all my family for the first time in ten years.

But the chaos of our Christmas was obscured by the sad news that came first on Christmas Eve; Status Quo frontman, Rick Parfitt, had passed away, and then on Christmas Day, George Michael had also departed.

kitchen in festive headwear to Wham’s greatest hits, I retreated to the study to dig out an old interview I’d written, and to remember the former, Rick Parfitt.

I first met Rick – in the height of my groupie days – backstage before a Status Quo gig in Gibraltar. No press passes had been issued so I’d blagged a ride to Gib with some of the rigging crew and had then hustled to obtain first a ‘Crew’ pass, then a VIP one (imperative for the free bar!) and then of course, the piece de resistance; an ‘Access all Areas’.

By now, I’d secreted myself into some of the highest profile dressing rooms in the music industry so I’d concocted a fool proof groupie handbook that never failed me.

1. Short shorts. Whilst I’m the first to call for brains before beauty, I cannot stress enough the success of short shorts in this field – and of course, the shorter the better!

2. A slogan T-shirt. NOT the band’s T-shirt, it shows complete lack of originality, but something funny always works a treat!

3. Brazen outrageousness and a quick wit.

I was armed with all of the above as I rounded the corner to Rick’s dressing room and introduced myself, planting a kiss on each of his cheeks. He took a step back to decipher my T-shirt. “When I’m good I’m very, very good!” he exclaimed. “Well, that’s good then” he chuckled.

“Oh no! You must see the back!” I instructed, spinning on my heels and pulling my hair to one side.

We chatted and joked; he signed my T-shirt and CD, smiled for photos and called me a “Cheeky little Madam” before sending me off on my merry way to go crowd surfing.

The last time I saw Rick was last spring; I was interviewing him for a local property magazine about his latest venture, the Guadalmina-based estate agents, Status Homes and he was charismatic and thoroughly entertaining. 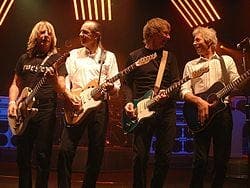 It was a charmingly honest and touching interview in which he revealed his current dreams, ambitions and priorities… but more than anything his love for his family.

My son is close in age to Rick’s twins and he happily talked about his own family.

He also waxed lyrical about his life in Andalucia and how much he loved it here.

After reading the interview in full, I sat for a moment in sadness and then closed the computer and headed back to the raised voices, yelps and screams in the kitchen where I kissed each member of my family.

“What’s up with Nat?” my brother hooted. 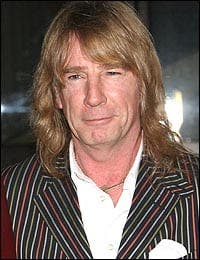 And with that, I slid my signed Quo CD into the machine, and the whole family chanted a happy, drunken, chorus of “Rocking all over the World.”