SNOW and ice will blanket parts of Andalucia when a cold front hits this week.

Agencia Estatal de Meteorología (AEMET) has predicted daytime temperatures as low as -4 in during the big freeze, which is set to takeover the region from Wednesday until the weekend.

Cordoba looks set to be the coldest province, with snow expected in towns such as Priego.

Ronda and Antequera can also expect flurries on Wednesday, along with night time temperatures of as low as -5c.

In Malaga and on parts of the Costa del Sol, it could reach as low as 2c that night. 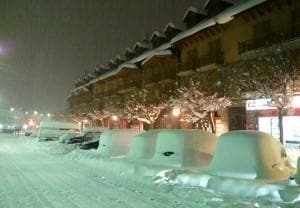 northern and central Spain, which in places were inundated with heavy snow fall.

Pyrenees and the Sistemo Iberico areas will be the coldest in the country, reaching a bone chilling -15c.

The cold snap is due to the arrival of high pressure bands and strong winds from central Europe, which will make Spain feel drier and colder.