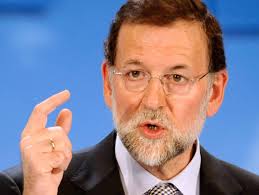 Mariano Rajoy said that EU powers were ‘not going to accept’ a UK government attempt to rip apart the ‘four key freedoms’ enshrined in the EU single market to suit its own ends.

He attacked May’s belief that she could pick and choose between the key principles of free movement of people, goods, services and capital, stating that they can only be enjoyed together.

He made the comments in response to May’s landmark speech on Tuesday, in which she committed to leaving the single market and controlling migration but pushing for the ‘freest possible trade’ deal.

This is in addition to attempting to partially withdraw from the EU customs union and guaranteeing the rights of EU citizens in Britain and British expats in the EU.

‘We are not going to accept that.”

But Rajoy said it would be ‘very prudent’ to take a firm position on May’s plan until she triggers Article 50, which will formally notify EU of the UK’s plan to withdraw.

“I want to be very prudent”, he said.

“I will set a position when the (notification) has been given.

“We still don’t know what relation the UK wants with the EU.”

Diplomatically, he added that he hoped EU relations with the UK could stay as similar in the future as to how they currently are.

“I would like to maintain things as close to how they are now. There are many types of relations with the EU”, he said, in a nod to the different ones enjoyed by Norway, Canada and Switzerland.

“We are willing to have a strong rapport and working relationship in the future.

“All possibilities are open.”