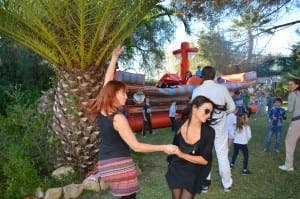 AFTER an overdose of food, family and festivities over Christmas and the New Year, there was nothing I wanted more than to hibernate for the entire month of January, to allow my liver, waistline and bank balance to recover.

Unfortunately, this fantasy was scuppered only a week into the year as my son turned to me one morning and asked, ‘What are we doing for my birthday party, mama?’

The monkey’s birthday is slap-bang in the middle of January, which writes off any chance of one of those fabulous Marbella beach bashes, wild pool parties or water park outings that his summer birthday friends throw each year.

So I conceded that a shindig at one of the indoor play parks might be the safest bet, ‘as you can never be too sure about the weather in January’, I told him.

The child scrunched up his face and took my hand.

“All I want for my birthday is a football match,” he explained.

“I’ll invite all my friends to a park, and we’ll have two teams, and a referee and picnics and cake… And no adults,” he added.

I suddenly had visions of 30 hyperactive eight -to-nine-year olds, high on sweets and fizzy drinks, running feral around Nueva Andalucia like The Lost Boys in Neverland, or worse – a scene from Lord of the Flies!

“You can have a football match,” I finally agreed.

“But we’ll have it in the garden, so that everyone can come inside if it starts to rain,” I reasoned, relieved that I could blame the weather as I thwarted his whimsical boyish dreams of bedlam with a sensible solution.

The whole class was invited…and friends from football…and neighbours…and their brothers and sisters, until it seemed that half the neighbourhood was going to be attending the ‘football match’ and for a brief moment I panicked that, God forbid it should actually rain, we’d never fit all of them into the house! 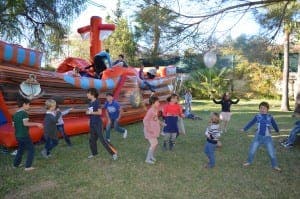 On the morning of the party, my fears evaporated as brilliant sunshine beamed through the windows of the kitchen where my little team of helpers worked away furiously, making sandwiches, blowing up balloons, dicing, slicing, chopping and mopping in anticipation of the impending chaos.

The next four hours was a blur of smiling faces, screaming children, music, madness and orchestrated mayhem as I directed games of musical statues and pass the parcel between goals, penalties and cake.

The party was a resounding success and, as I emerged exhausted from the kitchen at the end of the afternoon, a wide grin stretched across my face as I witnessed all of the parents bopping enthusiastically on the grassy dance floor and wobbling about in the late afternoon sun as they joined in a game of musical statues.

Cake was cut, wishes were wished and both adults and children whooped it up until darkness and exhaustion prevailed.

As I tucked the monkey in that night, we relived the afternoon’s adventures.

“Thanks for a great party, mama,” he whispered, “but I knew it wasn’t going to rain.

It never does on my birthday.”

I kissed his forehead, “You never know, my love,” I murmured, “you just never know.”

Three days later we awoke to freezing temperatures and, as we rounded a corner on the school run, the majestic La Concha Mountain loomed over us, its snowy cap glistening in the morning light.

Snow had fallen overnight and had hit the coast with the heaviest snowfall in decades.

“I didn’t know it could snow in Marbella,” the monkey exclaimed, elated, and I gazed up at La Concha and smiled.

As with everything else in Marbella, you just never know …

John Culatto - 30 Sep, 2022 @ 15:09
THE UK’s Gambling Commission has fined Gibraltar-based online betting company Betfred £2.87 million for failures of its subsidiary Petfre. According to the Commission, it failed...